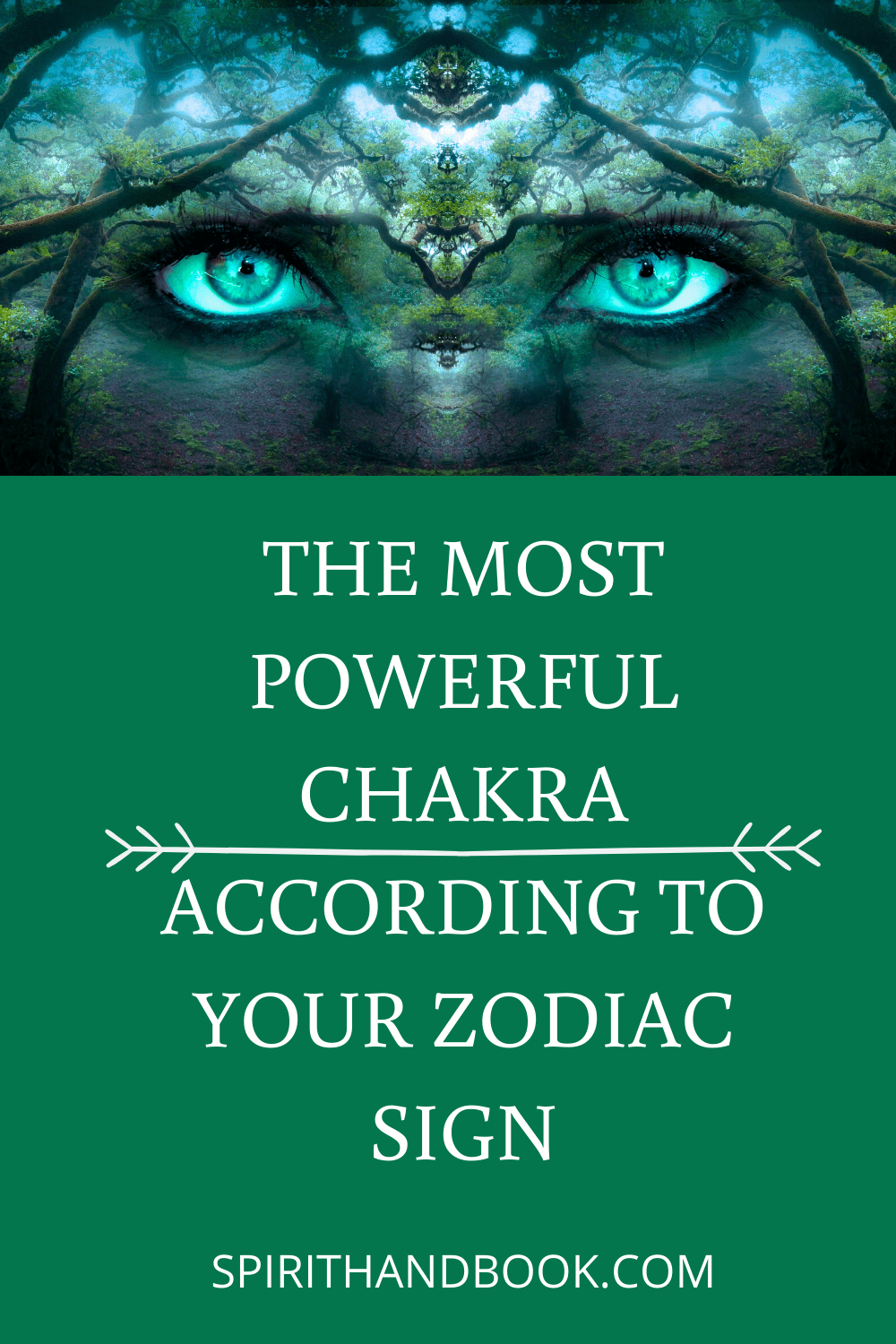 Discover your most powerful chakra according to your zodiac sign.

Align your body with your chakras and dissolve stuck energy in order to heal yourself and manifest the life you want.

Chakra is a Sanskrit word that means “wheel of energy”.

People believe that our health, strength, and vitality is better when our chakras are aligned in harmony with our aura.

There are seven primary chakras that not only rule but also reflect the dynamics of the emotional, spiritual, and physical self.

These chakras begin at our tailbone and eventually move into the space above the head, which is considered the living space of the mind. Our soul energy is considered to be slightly above our head in the back.

Knowing your most powerful chakra according to your zodiac sign can really help you activating this chakra and strengthen your spirit, mind, and body through these spiritual energy points.

Please note: This post may contain affiliate links, which helps me keep writing free content for you. Whether you purchase something (at no extra cost to you!) is completely up to you. Thanks for your understanding.

The most powerful chakra based on your zodiac sign

The solar plexus chakra is the most important power center of Aries, as both are ruled by the planet Mars.

It is a complex network of nerves (a plexus) located in the abdomen above the navel. Also, you can consider it the source of personal power, self-belief, and self-worth.

For a Taurus, the fourth chakra, the green heart chakra, is the most powerful because both, the Taurus and the heart energy, are ruled by Venus.

The 3 upper chakras and the 3 lower chakras are connected through the heart chakra.

Your ability to sympathize with human beings can not only help you build strong bonds of love and compassion, but also lead to various financial gains. If your heart chakra is open and radiating, you are full of love, forgiveness, and compassion.

A Gemini born is ruled by Mercury, and therefore his throat is his primary source of energy. It’s associated with creativity and communication.

You can gain the trust of the majority and influence a large number of people through the ideas and opinions that you have. Since your most powerful chakra is the Throat chakra, you are born to express yourself with words. Search for speaking careers, like singing, teaching, etc.

Cancer is influenced by the sixth chakra, the third eye chakra, which is the psychic center of his soul.  It is located on your forehead, between and slightly above your eyebrows.

Since the Cancer is born under the influence of the Moon, he is receptive to visions and he can foresee the future.

With your Third Eye, you can access deeper truths – and see beyond the physical.

The health of the Third Eye or Ajna chakra is particularly vital.

The royal Lion is associated with the seventh chakra, called the crown chakra.

Dominated by the invincible power of the sun, the space above your head is the most powerful chakra of your body, which helps you to understand, think, and implement solutions efficiently and easily.

The Sahasrara connects you to your higher self, to every being on the planet, and eventually to the divine energy that creates all things and life forms in the universe.

The Virgo is dominated by the fifth chakra, the Throat chakra.

A Virgo naturally feels better when his throat is in a healthy condition.

You are made to communicate facts precisely or to speak in public – there lies your power.

Your most powerful chakra according to your zodiac sign is the seat of self-expression and it mediates between emotions and thoughts.

The heart chakra is where the physical and spiritual come together. It is the source of all energetic and emotional healing.

Libra is ruled by the planet Venus like the fourth heart chakra, which enables him to build strong relationships and bonds or to love his partner with great unconditional affection.

You are altruistic and respect others.

The heart chakra helps you to get involved in creative projects.

A Scorpio is dominated by the third chakra, the Solar Plexus chakra, which is located just above the navel and from which you derive your lust for power and abilities.

The Solar Plexus chakra gives you energy to control your thoughts and emotions, overcome any fear, and take appropriate action whenever needed.

Since the Scorpio is ruled by Mars, the level of sexual impulse is naturally high.

A Sagittarius born has the Sacral chakra as the most powerful chakra, which is located in your lower abdomen and under the control of Jupiter.

You have unbound optimism that fills your life.

Your Sacral chakra is healthy when you feel passionate and you openly speak about emotions.

A Capricorn is born under the rule of Saturn.

The first chakra, known as the Root chakra, is the most effective power center that anchors the higher chakras.

A healthy and radiating first chakra is necessary for general well-being, physically and mentally.

For an Aquarius born, the first chakra at the root of the spine is the most powerful chakra.

The root chakra provides grounding and support. It is the foundation for living your life.

The root chakra is where you connect yourself to the earth and put your energy into the physical world.

The second chakra or sacral chakra, located at the navel, has the strongest effect on a Pisces born.

The Sacral chakra is very active in your sex life and the expression of your sensual and sexual wants.

It also gives you boundless optimism. Also, this chakra is described as the seat of emotions, creativity, and intuition.

The Best and Worst Traits According to Your Zodiac Sign

The 5 Most Powerful Zodiac Signs (According to Astrology)