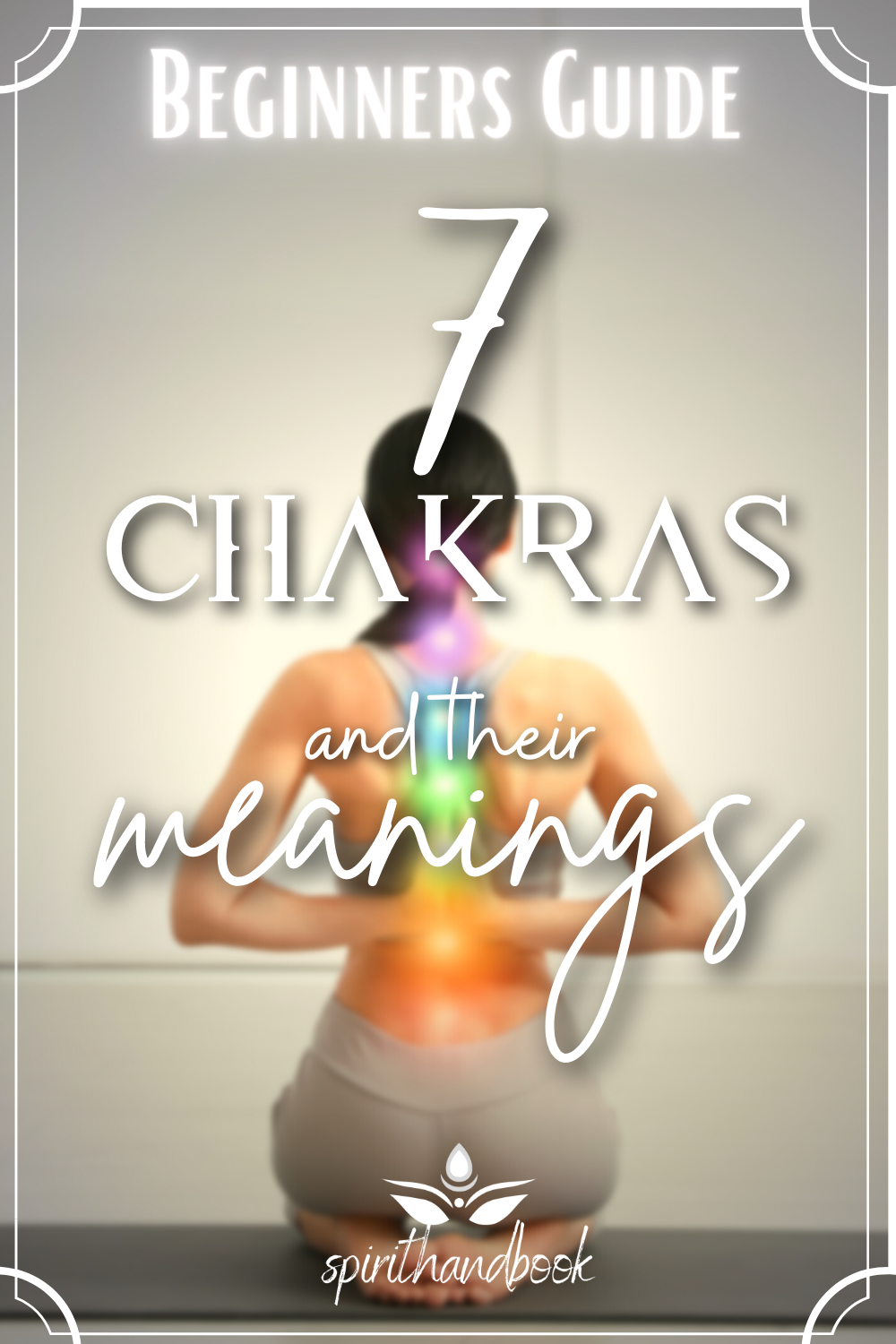 My readers support Spirithandbook. When you buy through links on my site, I may earn some coffee ☕ money (which I promise to drink while continuing to support your spiritual journey ✨).

Chakras – your 7 antennas into the universe have distinguishable meanings.

You may hear some yoga instructors say that doing “this movement” will make your chakra flows better or “that movement” will remove the blockage in a chakra. But what is a chakra actually?

Chakras are the energy, the unseen part of our bodies that is usually symbolized as disks that are constantly spinning.

The chakras play a significant role in yoga, affecting us on a physical, mental, and spiritual level.

What Is A Chakra

Chakra basically means “wheel” in Sanskrit. People usually refer to chakras as the flowing energy beneath the body. The energy should always flow smoothly so we may have better physical, mental and spiritual health.

To some extent, chakras do affect the main parts of the body, including major organs and the areas where our emotions are being controlled. They can give you energy and they can help you to be more balanced, resilient, and energized.

Some would say that there are around 14 different chakras, but the seven chakras below are the most commonly known.

So today, we’re going to talk about the seven different chakras, along with their own meanings. Each of these chakras is differentiated based on color and also functionalities.

Guide to 7 Chakras & Their Meanings

Below are the seven commonly known chakras and their meanings:

The first is the root chakra, symbolized by the red color. The first chakra belongs to the basic needs of life and survival, for security, grounding, and basic trust. When your root chakra is in balance, you have a solid foundation for opening the higher chakras.

If your root chakra is blocked it likewise manifests in physical problems. So if you are currently suffering from health problems like constipation, bladder, arthritis, or colon issues, there can be something wrong with your root chakra.

I know that it isn’t easy to detect what chakra is in trouble. And since there’s basically limitless information available, it’s nearly impossible to learn about all the chakras. Thus, choosing a psychic reading online might be the best thing you can do. The process is easy, and it’s pretty straightforward. Thus, you can finally know what’s the issue you’re currently having with your chakra.

The next one on the list is the sacral chakra. The orange sacral chakra represents the creative flow of pure life energy, our relationship to our vibrancy and our passion for life. It also plays a central role in the expression and feeling of emotions.

This chakra focuses on the health problems highly related to private organs. So, if you’re having lower back pain, impotency, or urinary tract infections, then the problem lies in the sacral chakra perhaps. Improving the sacral chakra is also great for enhancing your sexual performance.

This is also the source of health problems related to the digestion system. If there’s a blockage in the solar plexus chakra, the person would likely suffer from heartburn, indigestion, or unhealthy eating habits.

The next one on the list is the heart chakra, colored in green. People with a dominant green chakra usually have a selfless character and always put others first. Many people also see the heart chakra as the bridge between the upper and lower chakras since it’s located right in the middle.

The heart chakra develops our ability for unconditional love and devotion. Therefore, this is elementary for long, harmonious relationships based on trust and respect. The heart chakra usually relates to heart problems and low or high blood pressure.

That’s the reason why working on the throat chakra is recommended when people want to improve their public speaking.

Many people do aspire for their third-eye chakra to be opened because it’s the chakra of higher perception. Intellectual, wise, intuitive people who think with intensified senses usually have a pronounced third-eye chakra.

When you activate your third-eye chakra, you enter into an intensive dialogue with your soul and can learn to follow your gut feeling and make decisions intuitively. By connecting with your third eye, you gain new and positive life energy and can face everyday life and its challenges with a balanced soul life. The third-eye or indigo chakra is the energy that connects you and the world – seeing the whole universe in a bigger picture.

Some people who have been blessed with an opened third-eye chakra after they were born can even see the “unseen” or “ghosts.”

Since the energy color is indigo, the spiritual community tends to give the name “indigo child” to a child that can connect to the spiritual world.

People who tend to be angry at everything, really skeptical about things, or simply bad-minded might have their crown chakra blocked. This chakra not only works on itself but also affects others. When the crown chakra flows smoothly, the other chakras will also do so.

The crown chakra is your access to the universe, and it differs from your other chakras for being located outside of the physical body – specifically, above the crown of your head, where you would place a crown.

By opening your crown chakra, you may have a better thought of everything, a calmer mind, and composed emotion.

My name is Elsa and I have been the face behind Spirithandbook for 3 years now. I hold a master's degree in psychology and combine the essence of the human mind with deeply rooted spirituality on my blog. Being Greek and German, whenever I'm not drinking coffee, I'm cuddling with my 3 cats Atlas, Cronos, and Gaia.

The 21 BEST Gifts For Spiritual Friends