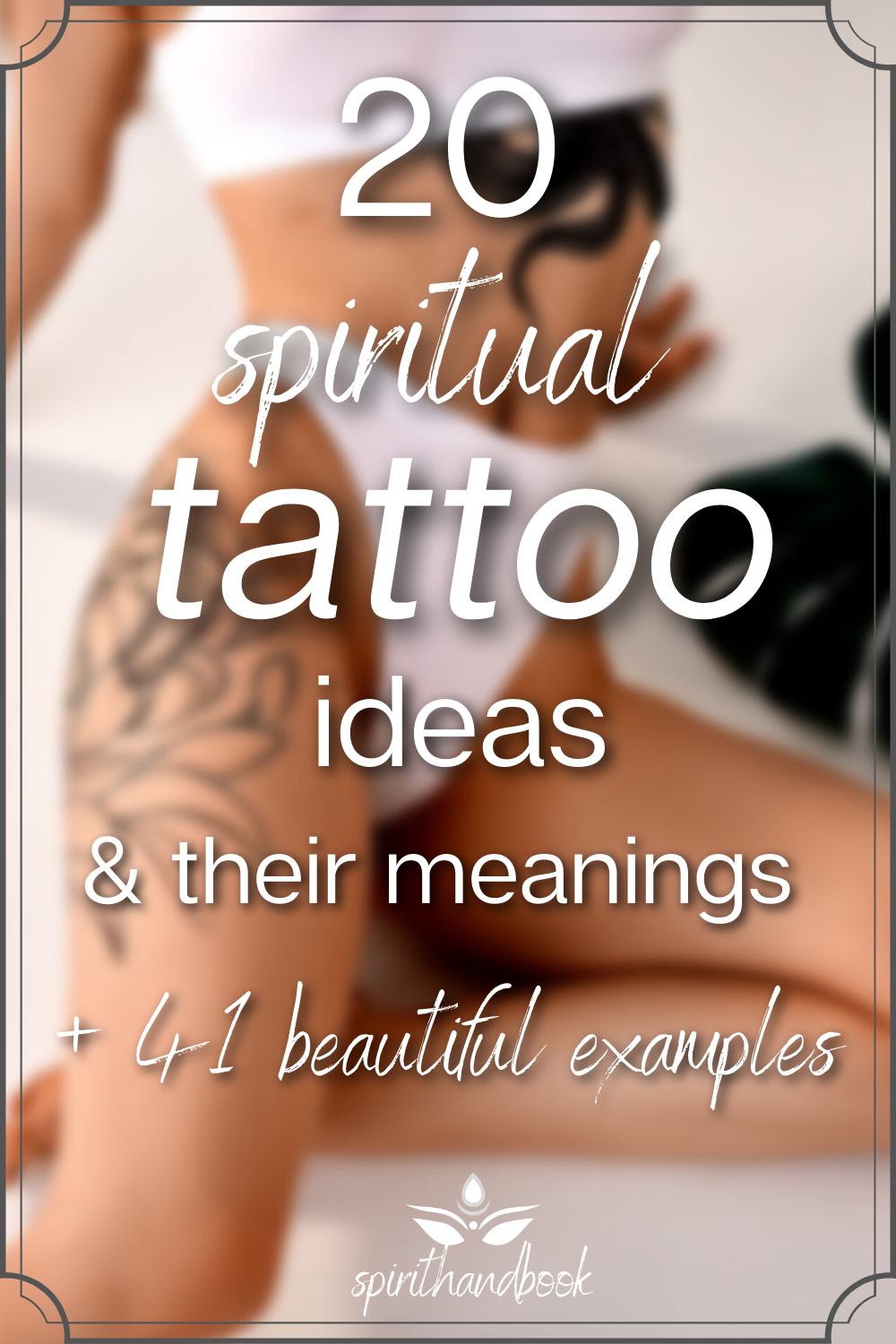 If you are reading this you are probably looking for a spiritual tattoo just like me.

I am 25 now and have no tattoos so far, have also never seriously thought about getting one. But the current transit of the lunar nodes in Taurus and Scorpio pushes especially people with these planets into the right karmic direction! Therefore, get ready for positive strokes of fate in the next months until July 2023!

As a double Scorpio, I feel this universal energy and feel a strong desire for change. I want a spiritual tattoo that perpetuates my approach to life on my body. So I started looking for inspiration.

Today I’ll show you 20 ideas for spiritual tattoos, that I loved and that you’ll probably love too!

Please comment down below (or on my Pinterest) on which spiritual tattoo idea you liked the most!

Unalome is a symbol derived from Buddhism and is described as the sign for the path to enlightenment.

The path begins in the middle of the spiral part, this part represents us at birth.

The opening of the spiral to the left represents femininity and to the right masculinity. The spiral symbolizes the difficulties of life: the possible uncertainties, confusion and fears.

If one continues to walk the “path”, moving forward in life, one leaves the spiral and finds curves. These represent situations and changes or turning points in life from which we learn and which make us stronger. You get wiser over the years and progress until you get to know yourself and your highest purpose.

After the curves, a part appears in the form of a straight line, this symbolizes the time when one has really come to know oneself and has achieved wisdom. The dots at the end of the line, symbolize that after reaching the end of this path, where one is still in the real world, it is not known what comes next.

For me personally, Unalome symbolizes the path to one’s personal spiritual awakening.

The snake is a primal symbol, in almost all cultures it plays a major role in myths and traditions.

There are very few symbols that are so interpretative and versatile and have such a range of polyvalent meanings.

Thus, on the one hand, the snake meant life, renewal, rejuvenation, shedding, resurrection, and
on the other hand death, poison and destruction. It symbolized the creative power of the earth. It was
the companion of the Great Mother, mysterious like her, enigmatic, intuitive, an uncontrollable,
unlimited, inexhaustible life force.

The snake is also connected to the underworld, had access to magic power and healing knowledge, was a symbol of power and wisdom and embodied the female logos, the wise word.

Our angels always find new ways to contact us and remind us of their presence.

It is quite possible that you have repeatedly seen certain sequences of numbers in your life – on license plates, receipts, flight numbers, and of course on your phone – and these numbers are not just numbers, they are angel numbers.

They are angelic messages and calls to action.

Each angel number has a specific spiritual meaning that you can immortalize as a tattoo. This is a beautiful way to always remind you of your divine guidance.

Chakra refers to the connection points between the body and the astral body (energy body, invisible shell) of the human being.

Each of the seven major chakras vibrates in a basic color and is connected with certain organs and areas of the body.

The lower chakras, whose energies vibrate more slowly, are associated with the basic needs and emotions of the human being.

The finer energies of the upper chakras correspond to the higher mental and spiritual abilities of man. Our development as a person depends on our correct functioning.

Even the Egyptians looked up to the stars when it came to fate, and believed that the stars on the day of birth determine the life but also the character. A zodiac tattoo embodies your characteristics and strengths and is the perfect choice for a spiritual tattoo if you have a deep connection to your zodiac sign.

There are several spiritual meanings of the lotus tattoo.

The lotus flower rooted in mud never gets dirty due to its surface texture. Dirt or liquid simply pearls off the leaves and blossoms. For this reason, the lotus flower is considered a symbol of purity, fidelity, creativity and enlightenment in Asian cultures.

In Buddhist belief, the lotus is the symbol of religion. It also represents the path from the human to the divine.

Even if you are not very familiar with Indian religions, you have come across Ganesha at some point.
What I like very much about the Hindu teachings on gods is the basic idea of the one great god/the divine. In principle, all gods are just different aspects and representations, but at the same time always the great divine itself. 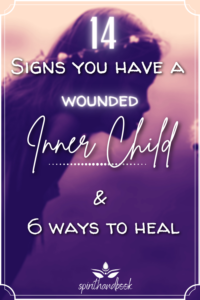 What Readers Love...
14 Signs You Have A Wounded Inner Child (And 6 Ways To Heal)

Ganesha is assigned the principles of wisdom, humor, and kindness. He is also considered to be the one who removes obstacles.

This means that there is no problem too big for Ganesha.

He is also considered a wise scribe, with a bit of mischievousness. He is the god of success and he represents wealth, prosperity, abundance and worldly happiness. Ganesha shows that external prosperity does not contradict spiritual wisdom. One never excludes the other.

Spirit animals come from the shamanic tradition. They are personal companions in a spiritual sense and appear in animal form. They are considered guardians of a person, give them strength and accompany them on their paths.

A spirit animal can also appear in difficult situations or phases of life and support, advise and strengthen their protégé in this time.

With a spiritual goddess tattoo, you can express your connection to your feminine energy and inner goddess.

The characteristics of the spirit animal Tiger are among the most powerful in shamanism. It is an important inspiration because it asks you to make a decision: Which path is the right one – the adapted one or the adventurous one?

The spirit animal meaning of the tiger wants to teach you that your creative power leads you on the life path of enthusiasm and freedom – courageous, serene, strong. But of course, this path also requires bravery and energy.

The spirit animal tiger has the meaning to convey wisdom and courage as a soul mate. An encounter with this powerful spirit brings you in contact with your passion, sensitivity and sensuality. It supports you in winning fights without hurting or disappointing other people.

The spiritual messages and abilities of the spirit animal tiger are:

Is there a special tarot card that always guides you on your life’s path? A card that appears over and over again or embodies significant moments of your life? You could take this as a template for your next spiritual tattoo!

In Buddhism, Buddha (“The Enlightened One”) not only refers to a person who has experienced Bodhi, but is above all the honorary name of the Indian founder of the religion Siddhartha Gautama, whose teachings founded the world religion of Buddhism. At the same time, a Buddha is the symbol of charity, care, wisdom and genuine love for all living things on earth.

Meaning of the Buddha at a glance

Ancient Egypt with its myths, legends, curses, and divine pharaohs continues to fascinate countless people. It would be too much to go into all the symbols at this point, but I recommend you take a closer look at them!

Since the beginning of time, the universe has been a source of fascination for humans. Whether you believe in astrology or believe that we are all connected to the energies of the cosmos, a spiritual universe tattoo could suit you!

A moon tattoo can have many meanings, depending on how the tattoo ends up looking or what phase of the moon it represents.

In astrology, the moon is called the mirror to the soul and it represents fertility, romance and the female cycle.

Since ancient times, numerous myths revolve around the sun and in many cultures the sun has a very positive and spiritual symbolism. Without the sun there would be no life on earth and probably not us humans.

In astrology, the sun as a female principle stands for:

The Sun shows the ability for personal commitment and raises questions of self-fulfillment.

The spiritual meanings of sun tattoos are the following:

I think that all women are witches, in the sense that a witch is a magical being.